we pulled into a gravel lot adjoining a bed & breakfast in the small town of chianti in the region of tuscany just as dusk was setting in.  we had rented a car in florence and i had eagerly taken to the narrow, winding roads of the italian countryside, whipping our tiny black fiat to and fro, this way and that, far exceeding the speed limits and making my copilot, dave, nervous on more than one occasion.  periodically i would feel guilty, but those feelings usually only lasted as long as the next adrenaline rush. 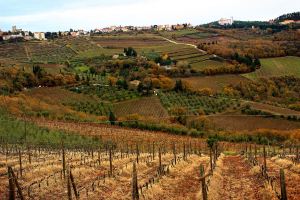 we checked into the bed and breakfast, a charmingly decorated place called the hotel salivolpi. it had a style i could never replicate in my own home even if i had stolen all the furniture and accoutrements straight from the lobby.  the woman operating the place appeared to be the owner/operator, and she had a kind but direct and efficient manner about her.  i inquired if anyone else happened to be staying at the b&b,  aware that it was christmastime, and was semi-disappointed when she informed us there was only one other couple, newlyweds, at the inn.

i then laughed to myself when i began to pick up on the fact that she believed that dave and i were some sort of granola-y, bearded gay couple looking for a romantic getaway in quiet tuscany.  this amused me, and i did nothing to dispel her assumptions.  i don’t think dave had picked up on it, but once we got settled into the single-king-bed room that we were sharing, i told him and we had a good laugh over it. END_OF_DOCUMENT_TOKEN_TO_BE_REPLACED