…a few hours later we were back on the bikes again.  a quick 5 minute ride over to a friend’s house for a dinner party.  I made sure I wore the only collared shirt that I currently have, as I didn’t want to make a bad impression on sam & jenna, because apparently most of their friend group would be here tonight.  I put forward my best “friendly face” (many of you know that isn’t always easy for me…) and ascended the stairs to the dinner party.

at first, I really just wanted to observe the scene.  there were a lot of big personalities here and I didn’t really want to offset the balance.  I often consider myself a bit of a chameleon socially;  I can become whatever the conversation is lacking.  If there’s no firestarter, I can be the one who gets things going, if there’s no funny guy, I can tell the jokes, if there is no quiet contemplative listener, I can shut my mouth.  so I was waiting for my self-designated role assignment when I realized that this group really had balance.  everyone in the group was smart, witty, funny and fun. they all had different perspectives and opinions that were never horribly off-base by any means.  ahh screw it, I thought, just jump.

the person i immediately got along with most easily was one half of the evening’s hosts, mark.  he and his wife marije have a wonderful, spacious place on the top floor of a really badass building with a rooftop patio that overlooks the city and, you guessed it, a canal.  I immediately fell in love with their place, but anyone would.

anyway, mark has a larger than life personality with a very perceptive whip to boot.   never one to let an opportunity to laugh go by, he garrulously facilitates any conversation he’s in with a patient energy that provides a wide open landscape where one need not worry they’ve overstepped their boundary

with a topic, but you better believe that if you speak arrogantly or incorrectly he will call you on it.  Just my kinda guy.  mark is actually an american expat who is a successful entrepreneur/venture capitalist with a very shrewd business sense.  Not much gets by him.

His wife marije perfectly compliments him.  She has a slightly more delicate nature about her and a very subtle (at first) sense of humor.  You don’t see it right away, but eventually you can tell she’s paying attention, waiting.  Being the only real native dutch person in the group, and if I’m being perfectly honest, I really just thought she kind of quiet at first.  But then right when I thought I had her figured out, she drops a hilarious joke in mid conversation that immediately got everyone’s attention in the party and had us laughing for what seemed half the night.  Eventually I talked with her a little more, learning that she was extremely well traveled and had lived in quite a few places all over the world, and also had some entrepreneurial ambitions of her own.  She also can COOK.

Oh my god, I don’t think I will eat as well at any other point on this trip as I did during my time with mark and marije.  she made us a three course meal that culminated in a ugandan stew she learned to cook during some volunteering she did for a few months with a small village down there previously.  when asked, mark modestly shared some stories with me of some of the ways they made a difference with this village, chiefly by purchasing a cow for them which drastically changed the future for these people by stimulating their local economy and food production through dairy and producing more cows, etc.   truly way more ingenious and affective (effective too, I suppose) than donating money or just doing vacation bible school for the kids, like most churches do when they perform “missions work.”

I also met riordan and Justine.   Super fun people, I got to hang out with riordan and chat enthusiastically about the virtues of the gopro camera.  Riordan and justine were also both from south Africa, and he was a surfer.  So he has a much more practical need for a gopro than my nonsensical videos that I produce.  Riordan has a really fun energy with a great appreciation for laughter as well.  He has the ability to go on tangential jokes where you can just take a scenario with him and he’ll play it out with you til it gets to its most ridiculous point.  We had a couple good laughs on the rooftop of the house while mark barbecued.

pierre was also there (whom you know from the previous post on the boat canal ride), but there was also charlotte, yet another south African who shared some stories with me about Budapest when I mentioned I was thinking about going there.  She got really excited and then told me she had some transit coins that I could use when I go there.  She made a note to bring them to me before I left Amsterdam, which was very kind, considering she had only just met me.  We also

chatted a little about how she had spent some time living down in Houston, texas.  It had been awhile since she had been there, and unfortunately I’d only been there once for a wedding last year, so really all I could joke about was how hot it was down there.

But overall, I was struck by how open this group really was.  None of these people had known each other before Amsterdam and now here they were, sharing food at a house together, not bothered in the least that a stranger was amongst them.  I drifted along with the ebb and flow of the conversations listening to the stories, enjoying the laughter, trying to soak in each person as they spoke.  eventually the boys escaped to the rooftop for drinks and cigars and stories of ridiculousness, while the ladies stayed down inside and most likely talked about much more civilized, classy things. 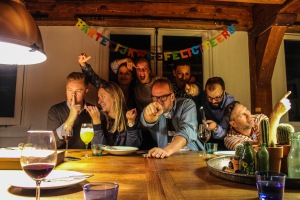 Eventually the night had wandered off into the dark, and people began heading back to their own homes.  We thanked mark and marije graciously and headed back to sam & jenna’s, surrendering for the evening.